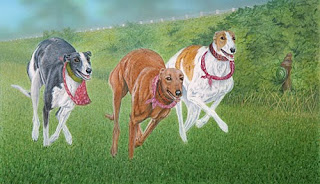 Final touches need to be done yet, which could mean a lot or it could be a little. Find out when the final painting is revealed in just a couple of days. To be announced! See how it is done on my Painting Blog - From Start-to-Finish here http://www.danwaltz.com/bloggreyhounds.html

Posted by Dan Waltz, author, illustrator, artist at 4:06 AM No comments: 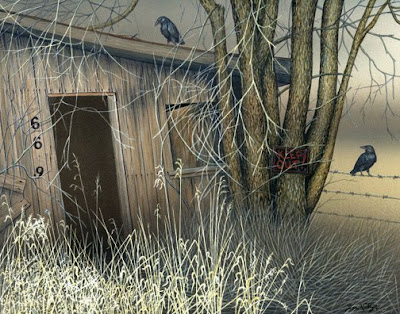 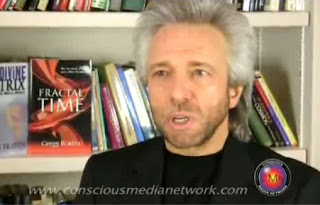 Interview with Gregg Braden 2 on Fractal Time
Posted by Dan Waltz, author, illustrator, artist at 3:24 AM No comments: 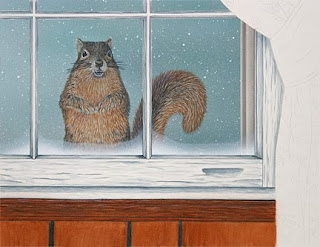 My Squirrel Painting Demo is going well
and will be coming to completion in just a few days.
Make sure you check it out when you get a chance.
http://www.danwaltz.com/blogsquirrelpaintingdemo.html
Posted by Dan Waltz, author, illustrator, artist at 4:10 AM No comments: It’s time for me to run. I have more stories to write, more paintings to paint, and many more books I would like to read…
P.S.  Need even more time? By getting yourself up out of bed one hour earlier each day will give you fifteen extra full days a year, to spend however your like. It’s like giving your self a two-week vacation, or an extra fifteen days to accomplish something special.
Cover quote:
“Grow old along with me! The best is yet to be.”~ Robert Browning
This story is a work of fictional literature, any resemblance or similarities to places, or real persons, living or dead, purely coincidental.
•••
©. 2011 Copyright. All rights reserved. No part of this book/story may be reproduced, in whole or in part, in any manner without written consent from the publisher.
D.W. Publishing 226 McFarland Street Grand Blanc, MI 48439 www.dwpublishing.com_or_www.danwaltz.com email:_dan@danwaltz.com
E-BOOK: Digital Edition
Posted by Dan Waltz, author, illustrator, artist at 5:34 PM 3 comments: I hope everyone has a HAPPY GROUNDHOG DAY!
We've had a couple of very cold weeks here.
Lets hope he doesn't see his shadow.
Common Spring!
Posted by Dan Waltz, author, illustrator, artist at 6:19 PM No comments: 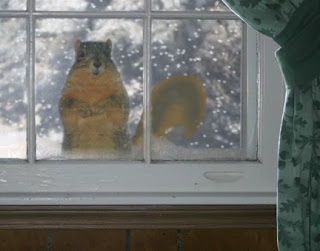 In the previous post, title "Inspiration"  you'll see a photo that I took of a squirrel looking in on me while I worked on my computer in my living room. It inspired me to lay out my next painting (layout above).  This is a combination of several pics that I took into photoshop to come up with the layout for my next watercolor painting. It turned out a bit more complicated than I like for demos, but I'm going to try it anyway. You'll be able to see it step by step right here on my blog when I get started.
The Painting Demo has started! Keep up with the progress by clicking here  Squirrel Painting Demo
Posted by Dan Waltz, author, illustrator, artist at 10:47 AM No comments: 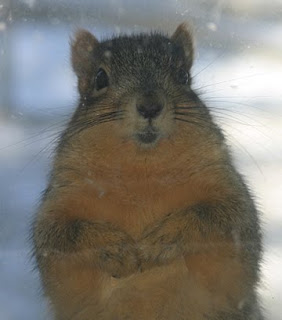 Finding inspiration for a painting can be difficult at times, but I feel thats mostly caused by the mood that you're in. Sometimes you just don't feel like being inspired, or your mind is somewhere else at the time and you miss out on great opportunities. Sometimes you think that you have to go to a special place to get inspired, maybe travel the world, go to another state, or town. Maybe you don't need to go that far at all and all you really need is an open mind and look out in your own backyard.

Then there are times when inspiration comes looking for you.

This cute little guy was looking in my window at me as I worked on my computer yesterday.

I might just do that.
Posted by Dan Waltz, author, illustrator, artist at 6:40 PM No comments:

My thoughts on Twitter Background images can be found on my old blog. The link is posted below...

Posted by Dan Waltz, author, illustrator, artist at 10:56 AM No comments: 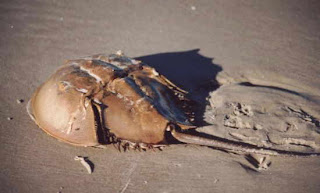 I watched a short special on horseshoe crabs this morning. If you're walking along the beach and see one lying on it's back. Be kind and reach down and flip it over. If you don't it will die. It goes to show that "One very small effort on your part can make a huge difference on the lives of others."

Posted by Dan Waltz, author, illustrator, artist at 7:55 AM No comments:

One of my favorite actors, Will Smith, has something to share with you that I felt was were sharing. Enjoy, and as always "Follow Your Dreams!"
Posted by Dan Waltz, author, illustrator, artist at 7:44 AM No comments: 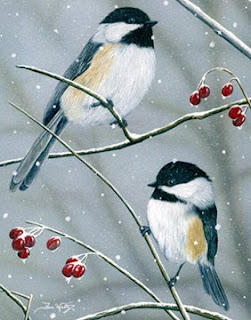 The Art of Dan Waltz Congratulations goes out to Lorna Wojczynski Pierce. She is the first winner of my first Facebook Fan Page prize giveaway. Lorna thank you for your interest and support. Winning Prize is a signed Winter Chickadee Art Print. Thanks to everyone who joined. Next drawing will be made when I have 201 Fans on my page.  All you have to do is join the fan page to be eligible to win. http://www.facebook.com/pages/The-Art-of-Dan-Waltz/283167838664  See official rules on this blog.

My painting demonstrations are located on my old blog and can be accessed through the links below....Enjoy!

Chipmunk Painting from start to finish.

I first want to thank everyone for joining my Facebook FAN Page. The response has been awesome and I really appreciate all your comments, questions and posts.

Now I want to make things FUN! I want to have a PRIZE GIVEAWAY!

Here’s how it works:

Your name will be automatically entered into a drawing when you become a Fan of my Facebook FAN Page and remain in the drawing for any future prize giveaways. Every time I reach another 100 fans on my page I will give a prize away. I will continue this drawing for every 100 FANS up to 1000 Fans. Prizes will either be one of my signed art prints, signed books, or one of my many other products that I have (Sorry, my choice).  After I reach 1000 fans I will then give a prize away after each additional 1000 fans, up to the 5000th FAN. I will then give away a grand prize of one original painting (Again, sorry my choice). Now you don't have to be the 4000th, 100th, 300th, 2000th or even the 5000th fan to win. You just have to be a FAN of my work and join my Facebook FAN Page (http://www.facebook.com/pages/The-Art-of-Dan-Waltz/283167838664).

BONUS! If you are a Fan on both, my Facebook FAN Page and my BLOG (http://danwaltz.blogspot.com/ )  there may also be a bonus gift given so make sure you sign up there too, just in case.

*All are eligible and everyone will have equal chance of winning and yes you can win more than one time.  Who knows, there may even be some prizes in between.

Now, the more FANS, the more PRIZES, and the faster the FANS come, the faster the PRIZES will come.  So you all know what you need to do. You need to tell everyone you know about me. Send them to my website (http://www.danwaltz.com/ ), and send them to my Facebook FAN page ( http://www.facebook.com/pages/The-Art-of-Dan-Waltz/283167838664 ). If they like what they see they may become a FAN on my Facebook FAN Page and that would be that much closer to another prize giveaway.  Lets get this ball rolling.   First prize will be given away once I reach 100 fans, which is getting very close.

Thanks again and good luck!

* Sorry, shipping of prizes to Continental US addresses only. If you live outside the Continental US and you are a prizewinner you will be given the option to accept or decline the prize. If you accept the prize you will be responsible for all shipping and handling charges. All prizes are final and not exchangeable or returnable for cash value. Rules are subject to change without notice. 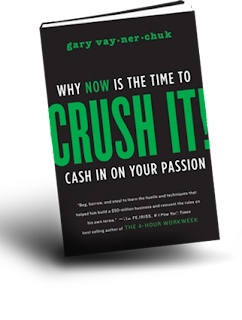 Crush it! by Gary Vaynerchuk

Gary brings to you an unbelievable amount of positive energy that you can't help but to get involved and get in gear, or simply get out of the business. He tells it like it is with no sugar coating. When you're done listening you'll want to listen again and again. There's a lot of information, good information, and sometimes you may feel the same information you can read in other books, but this is brought to you in a way that you will want to take action and not just say it was a good read. There's a lot of extras in the audio version that you won't want to miss. It's very personable and it makes you feel he's talking to you in the same room. This book is for everyone who wants more out of life, and not just for business owners who's trying to get ahead.

Thanks Gary for sharing your experiences.

Well, what did you think? American Idol on again for another season.  Simons's last season for what I hear. And, what's this I hear that Ellen Degeneres  taking Paula's place?  As much as I like Ellen, I didn't know she had any signing ability.  I wonder what qualifies her to be a judge.  Maybe she sings in the shower and I just don't know.  It should be interesting. I enjoy Idol and look forward to each season.  I always enjoy watching people, especially young people "follow their dreams." What's stopping you from following yours? 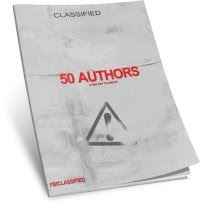 I signed up for a co-operative story project here on Facebook. 50 Facebook authors are collaborating on a story. Each of us is to write about 30 words to create one short story. I'll have to practice writing shorter sentences. I'm author number 43.
Posted by Dan Waltz, author, illustrator, artist at 5:12 PM No comments: 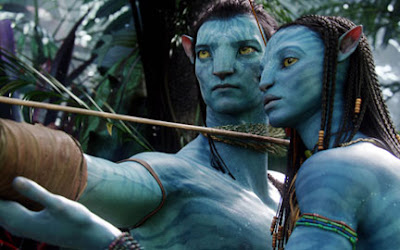 AVATAR by James Cameron
Have you seen Avatar yet? Well if you haven't you are really missing out. You don't have to be a big fantasy or science fiction buff to enjoy this movie. I watched it for the second time at the Imax today. It was just as good as the first and if I get a chance I will go see it again. It's simply an awesome film. Great story line & great effects which are two things that usually don't go together in todays movies. This maybe a strange way to look at it but it kind of reminds me of a cowboy and indian movie set in the future, instead of the wild, wild west. Don't worry you don't have to be a cowboy & indian fan either. There really is nothing else like it. Go see it, you won't regret it.
Posted by Dan Waltz, author, illustrator, artist at 2:07 PM 2 comments: 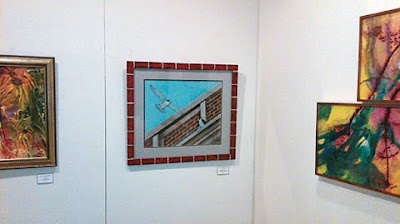 My Perigrine Falcon Painting on exhibit now through the first week or February at the GFAC Members art show. Downtown Flint.

One year ago this evening was the last time I worked on a story that I set aside for one reason or another. I guess I'll pick up where I left off 1 year 2 hours and 20 minutes later. Ironically the story is called Deja BOO. 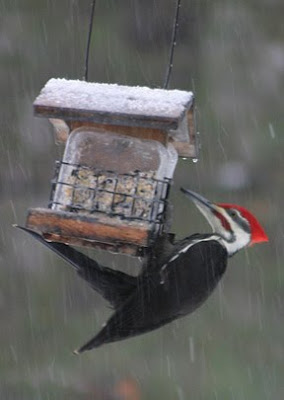 A jolly large Bird with a red cap visited the feeder on Christmas day; a male Pileated Woodpecker. Looks like it could be one of Santa's little helpers.