Paying for an autograph

"Autographs should be given free as an appreciation to the people who supported them and made them who they are today, not sold.” ~ DW

Like thousands of other people I attended Comiccon 2013 this year. I fought the traffic only to get there to fight the crowds. This was my fifth year attending. This also was the first year I have ever seen crowds like this.

With elbow-to-elbow room people pushed there way through a sea of people, passing by table after table, because you are afraid to stop and take look; afraid to get run over. You were grateful for the clearings, which were far and few between, were you could breath your own air.

The clearings happened to always be in front of the little guys, the shy, and the meek; the ones with smaller displays and little voices. If you didn’t look, and sound like a big shot, you were sure to be passed by; with too much to see, and too little time to see it all.

I go every year to see the talent, and give support. I usually support the ones, who stand out as being unique, different and that have a quality product. These usually aren’t the big shots, who just do the same old same-old stuff that sells.

It’s good to see the stars of your favorite movie or television programs as well. They are usually from past, some are just washed up TV & Movies stars trying to milk the fans for another dime by pedaling their autographs for outrageous prices.

Selling ones autographs to me is a huge slap in the fans face. They should be free to the fans, who have supported their careers, and made them the star that they are, or in most cases were. It should mean a “thank you for your support” over the years, not and extra 40-60 bucks.

Keep this in mind the next time you go pay for an autograph. Without that extra $40-$60 dollars you’re about to give them, your support as a fan meant very little to them.
Posted by Dan Waltz at 9:03 AM 2 comments:

Viral Bound has it all! 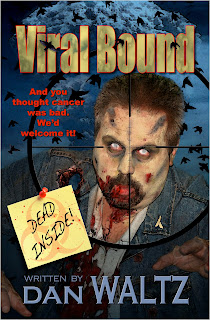 Do you like a good MYSTERY? A story that takes you places and keeps you on the EDGE OF YOUR SEAT? Maybe one with CONTROVERSY and SECRET SOCIETY stuff? Do you like ACTION and lots of it? How about DRAMA? Do you like to LAUGH OUT-LOUD? Maybe even TEAR up a little? How about a little ROMANCE mixed in? How about a story so believable, it makes you WONDER? Do you like GOVERNMENTAL issues? MEDICAL CDC, and the MILITARY involvement? Did I mention CONSPIRACY? Notice I didn't mention ZOMBIES? Zombies are a small part in this big story, yet big enough part to satisfy any zombie or apocalyptic appetite. VIRAL BOUND has it all. What are you waiting for? BUY IT! - READ IT! -  ENJOY IT! When you are done, please REVIEW IT on Amazon!